May 29: Colon Cemetery; Hemingway in Cuba

This morning, we are taken by coach to Cementario de Cristobal Colon where there is an amazing collection of memorials to Cubans of all walks of life. There are several distinct areas, distinguished by the wealth of those buried there. It is said to be one of the largest cemeteries in the world, occupying 138 acres where there are about 50 burials per day. While we were there for about 30 minutes, we saw two burial processions. It is the only  cemetery dedicated to the discoverer of the island.

Our local guide paid special attention to the grave of Amelia Goyre de la Hoz, known as “The Miraculous One”. It has become the custom to approach the right side of the monument walking forward, knock three times, and depart by the left side walking backward.

Of the many very impressive monuments, I’ll include only a few to give you the flavor of the place. 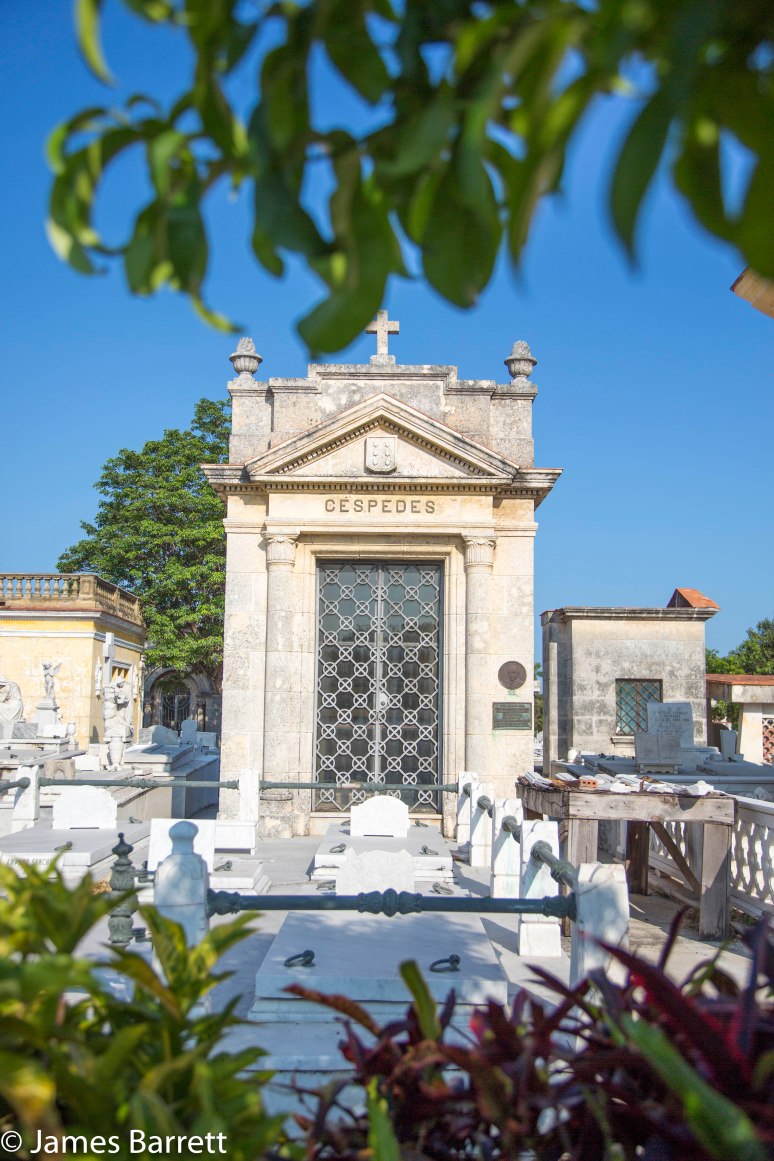 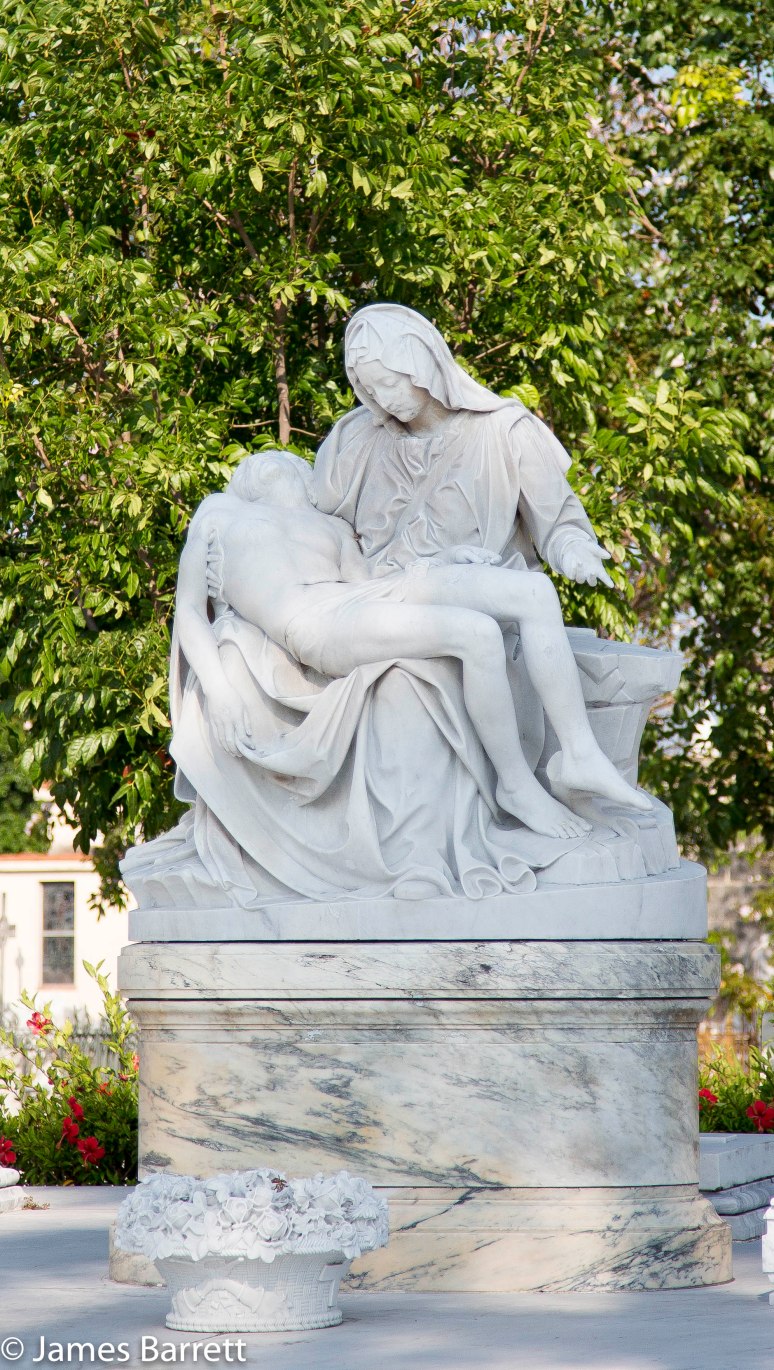 A monument to fire fighters. Note the tear drops hanging from the chains. 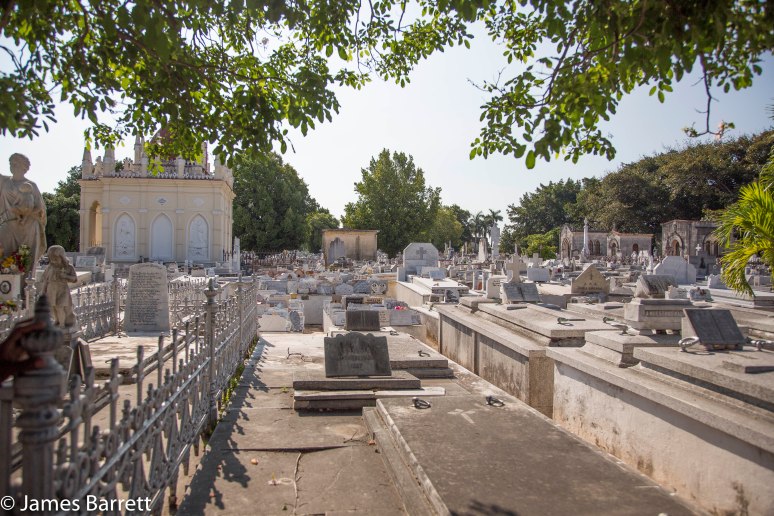 Eutimio Falla Bonet was a philanthropist in Villa Clara Province.

We were told that Raul Castro has allowed the sale of cemetery monuments, as many of the families now live off the island and cannot maintain them.

Next we set out to visit Finca Vigia, Ernest Hemingway’s home in Cuba from 1939 to 1960. We were taken around the home by a knowledgeable volunteer guide and were able to look through windows and doors but not able to enter. We were told that everything we saw was in the place where Hemingway left them as far as could be determined. Old Man in the Sea was written here.

Amy and our Finca Vigia guide with a restored Buick. 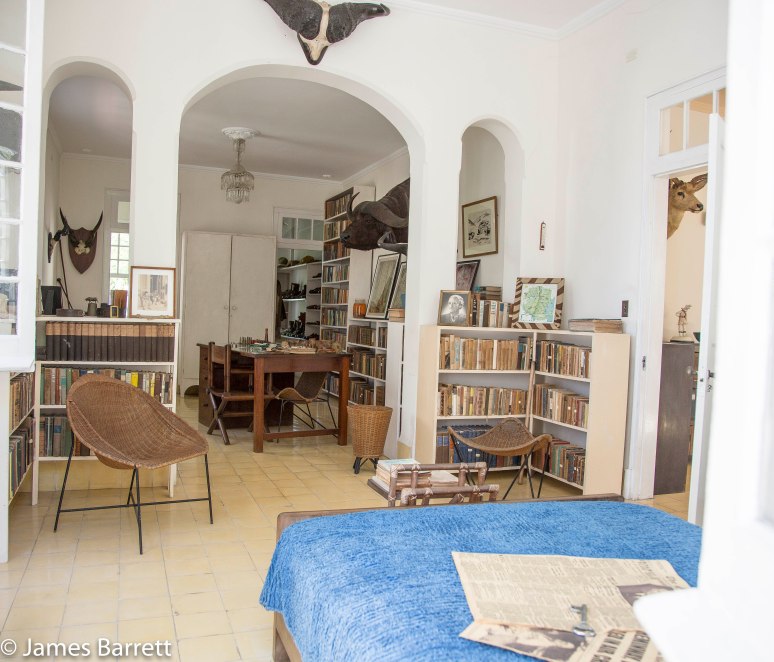 Hemingway had a separate desk for letter writing separate from composing literature, a discipline he undertook in silence during the early morning hours. 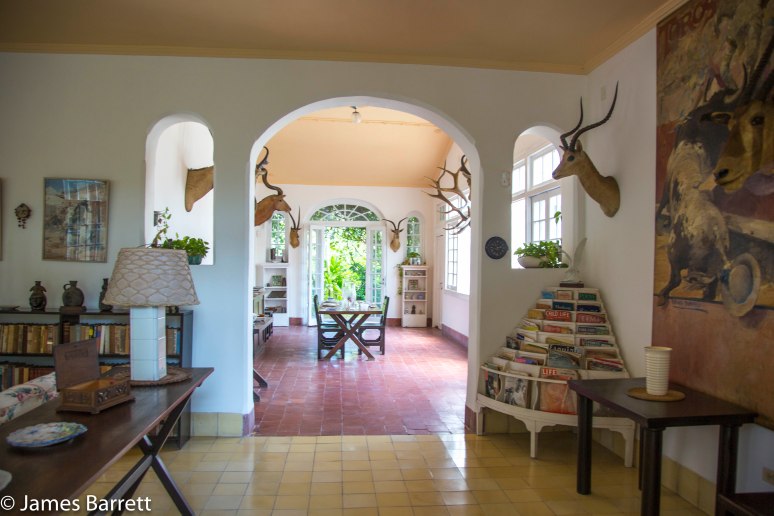 A Picaso ceramic wall hanging left when the family moved to the USA. 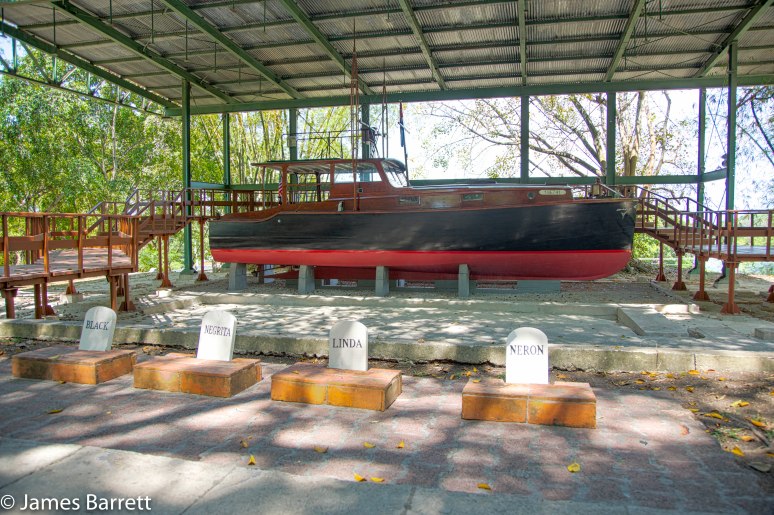 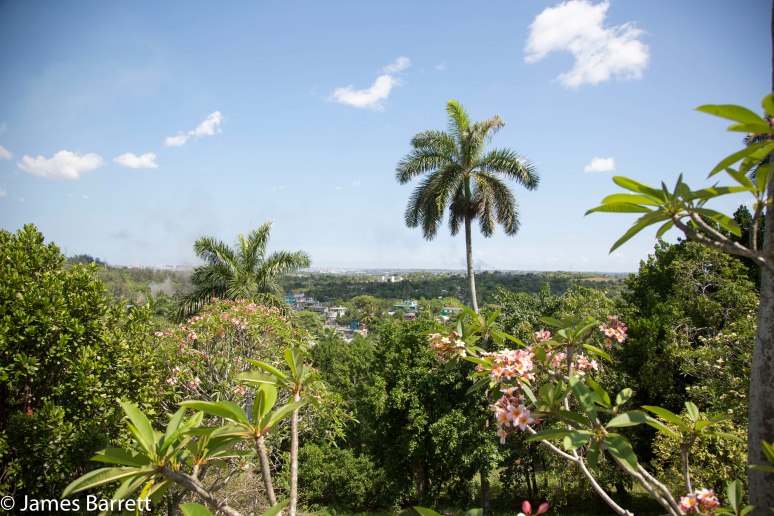 View from a lookout next to the house, shown on the sign above.

Before settling in for lunch at a paladar, we stop by a cooking school where we are taught to make the authentic mojito and a popular Cuban pork or beef dish, “ropa veija”. 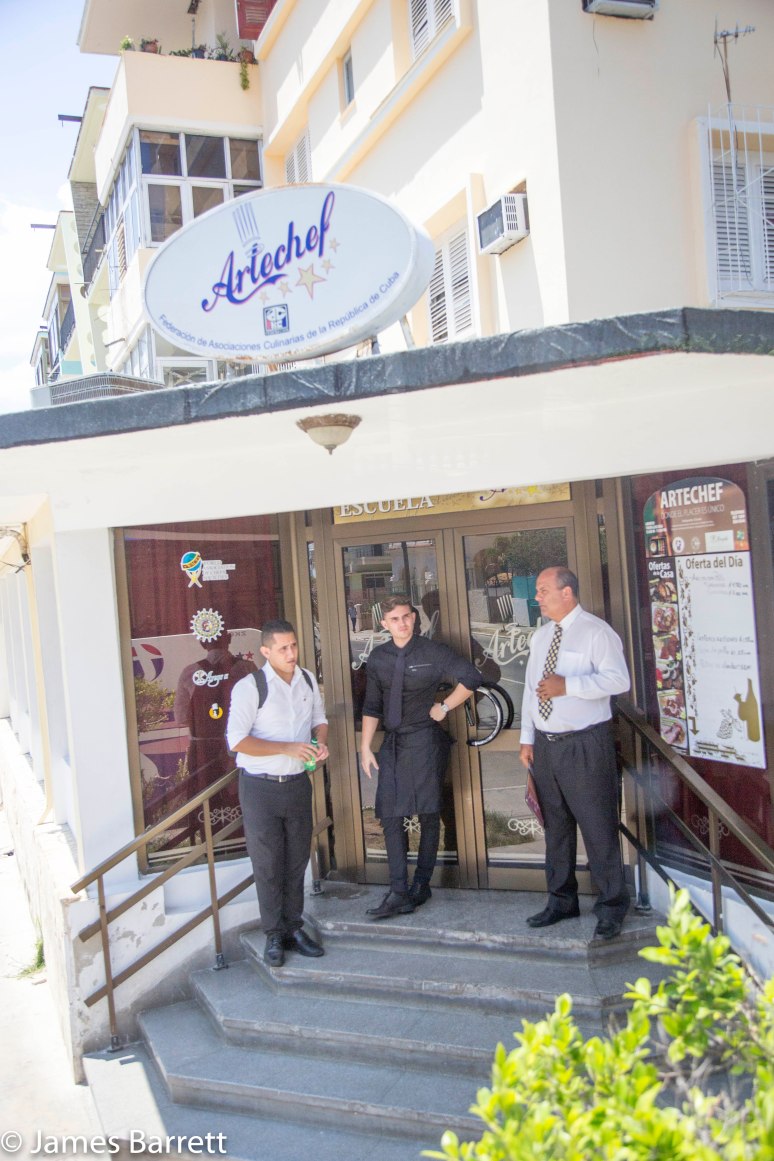 This cooking school is housed in a modern building. 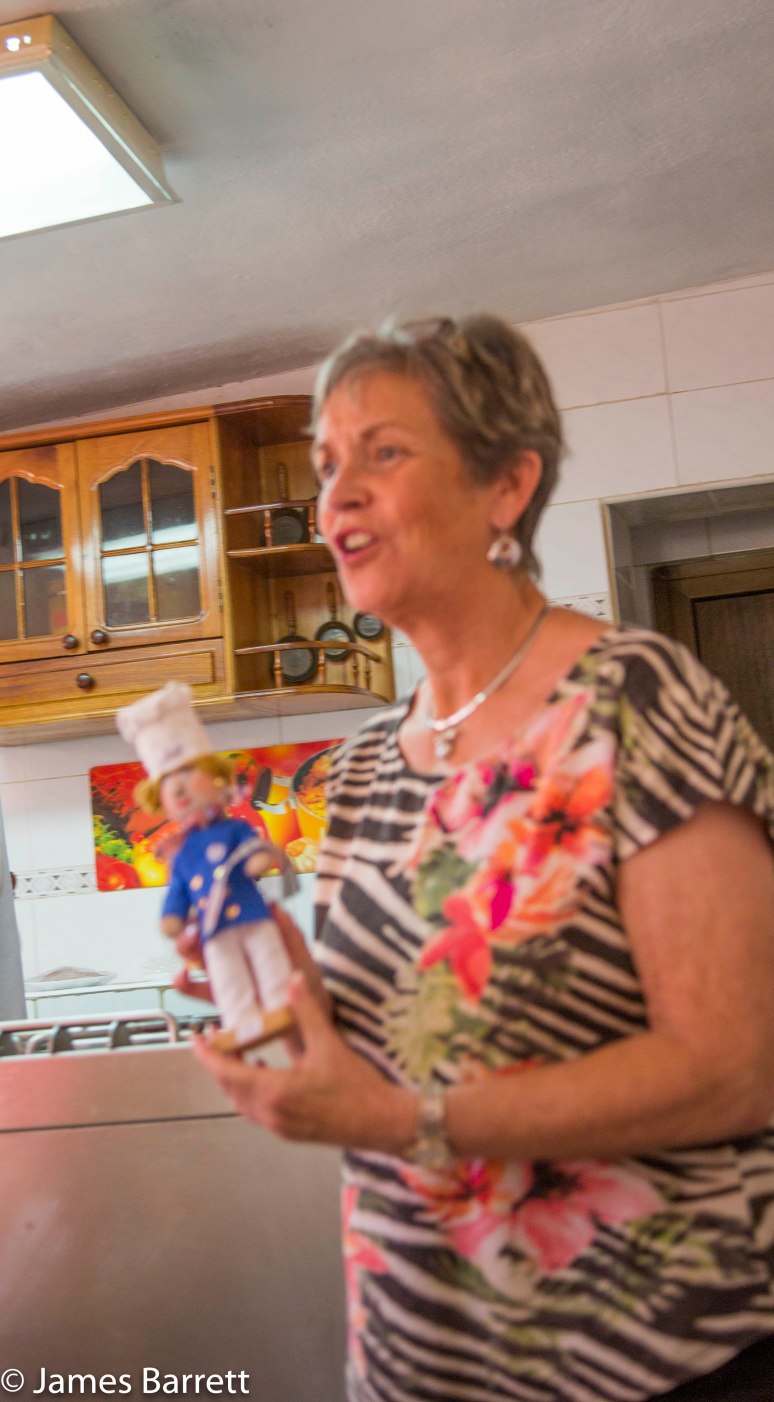 One of our group volunteered to make a mojito, and wins a trophy.

Amy volunteered, with a little coaxing from me, to make ropa vieja. 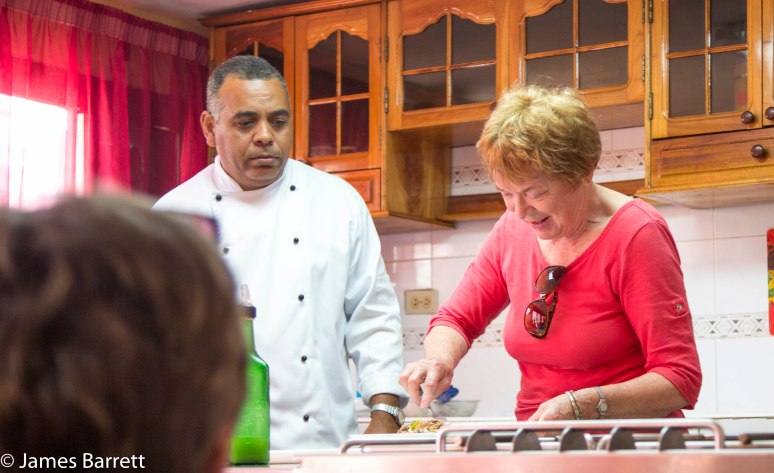 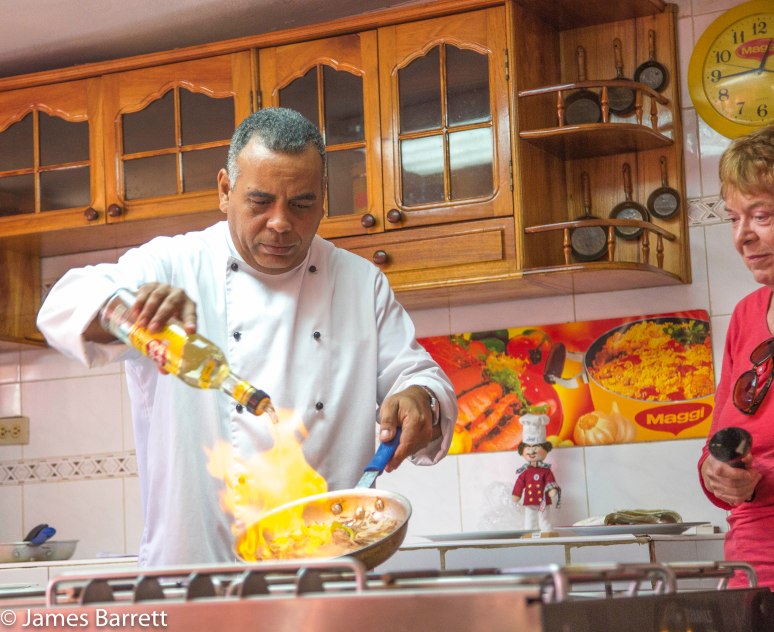 The addition of rum makes a visual treat.

Amy is given her trophy.

Note the Havana Club bottle with yellow label. I think that is made by the distillery abandoned by the Bacardi family when they left Cuba for Puerto Rico.

After lunch at a paladar overlooking the Malecon, we visit a community project to engage children as a healthy alternative to life on the street. This project is supported by UNICEF and focuses on children’s rights through love and nurturing.

Director of the project. 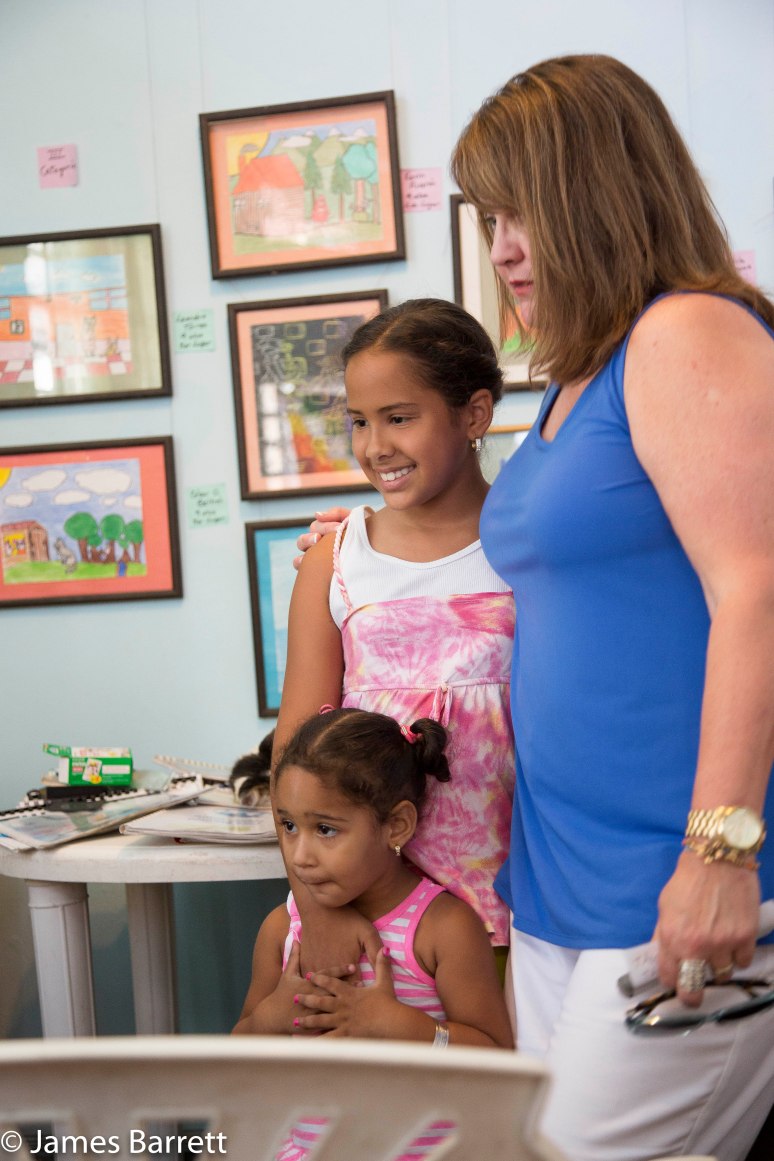 One of our group and two of the children.

Several of the girls.

We return to the hotel for our last night in Cuba. We look forward to our Farewell Dinner at  a rooftop paladar in downtown Havana.